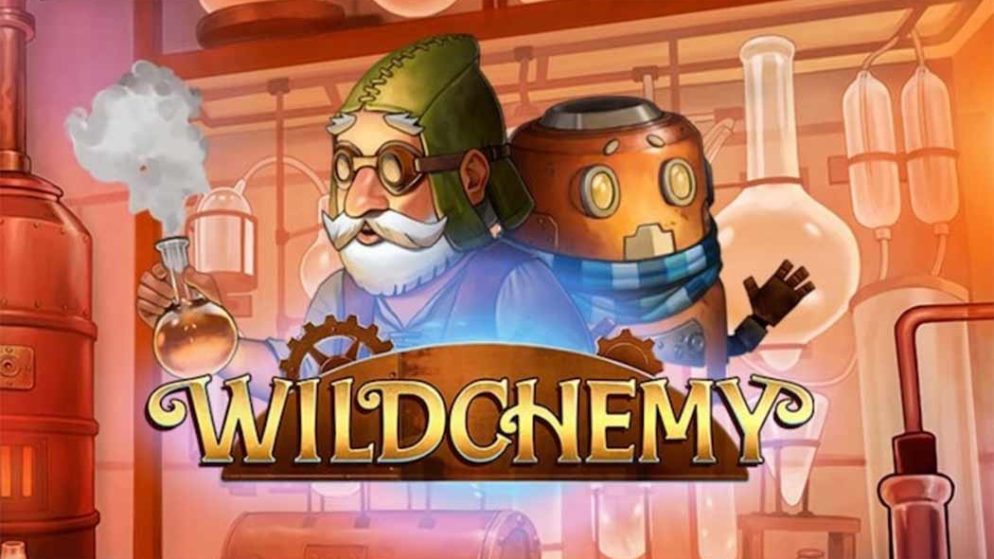 Wildchemy slot machine with the theme of chemical reactions from Relax Gaming developers. Do you like chemistry? If so, then you will definitely enjoy the slot machine called Wildchemy. But if chemistry did not cause you any interest, thanks to the developers of Relax Gaming you have the opportunity to look at this science from a different perspective and believe me, you will surely change your mind about it. You have to come back many years ago, at the time when chemical laboratories began to appear. Magic portals, scatters and a round of free spins will allow you to experiment with various potions, thanks to which you can earn good prizes.

The design of the Wildchemy slot machine looks very interesting. Alchemist’s laboratory, filled with various equipment and flasks with a potion is the background for the playing field. On the technical side, the Wildchemy slot is equipped with a 5×5 game screen, and in order to get a win, you need to catch at least three identical symbols vertically or horizontally.

As expected, the character set includes images related to chemistry. Low-paying symbols are represented by various flasks with a potion (blue, white, green, yellow and red). The more valuable include – scales, amulet, pestle, and mortar, as well as a robot. The highest-paid symbols are a scientist and the wild, which increases your bet by 50 times when five of them line up vertically or horizontally. The wild symbol also replaces all the images in the game, except for the scatter, it is represented by a bulb with a pink potion.

Bonus features of the Wildchemy slot

In the Wild Chemistry slot, winnings are created by dropping three or more identical symbols vertically or horizontally. After this happens, you will see that the symbols involved in creating the win will be removed from the playing field, and new ones will appear in their place. This feature is known as Cascading Reels.

The Magical Portals is another interesting feature that awaits you in the Wildchemy slot. Notice the two portals in the upper cell on the first reel and the lower on the fifth. If the same symbols coincide in both portals on the same rotation, they and all other instances of this symbol elsewhere on the reels become wild, after which you will be paid.

Free Spins feature – activated by accumulating scatter symbols during consecutive wins. As soon as you receive 4 scatter symbols in one rotation or even one at a time during four consecutive wins, the function is activated. As soon as this happens you will get 4 free spins, but note that for each additional scatter you will be credited 4 more spins.

An interesting point during the round of free spins is that another magic portal appears in the playing field (in the upper right corner). If two symbols in any portal coincide, all identical symbols that appear on the playing field become wild. Also during free spins, all winnings will be calculated taking into account the multiplier x2. Unfortunately, the function cannot be restarted, since the scatter symbol will not appear in free spins.

In conclusion, I want to say that Wildchemy is a simple, but at the same time fascinating slot machine with high-quality graphics and interesting bonus features, playing which you will have a great time.