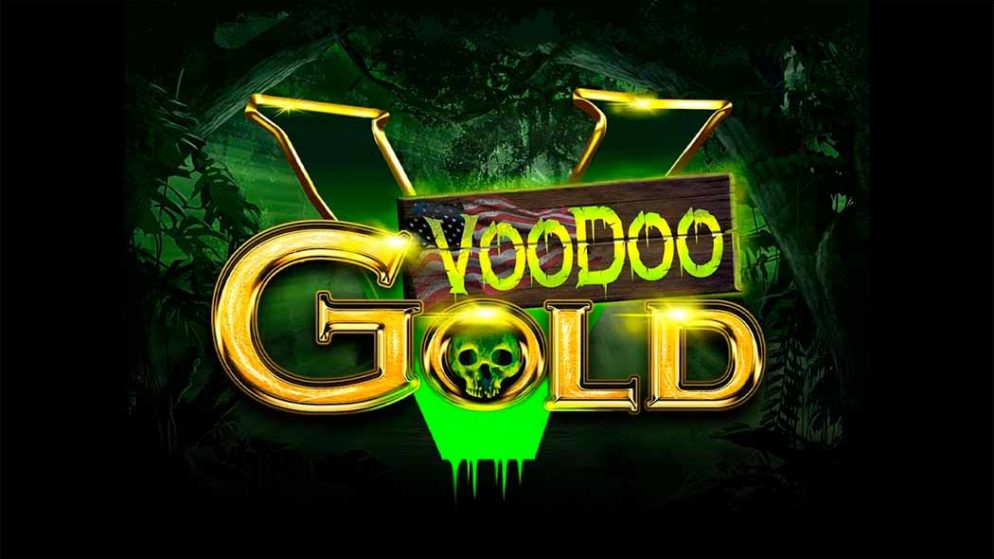 Voodoo Gold is an adventure-themed slot machine by ELK Studios. Voodoo Gold slot is the third in the Elk game collection with a brave explorer named Kane. In the first part, entitled Ecuador Gold, he looked for gold in the rainforests of South America. In the second part, called Tahiti Gold, he looked for gold near the volcano. And in the third part, called Voodoo Gold, he will visit Louisiana’s mangrove swamps, which are a voodoo country, it is here that everything worldly turns into something dark and unusual in an instant.

After a long search, he finally finds a shaman and enters his shelter, but only those who are ready to take part in an ancient ritual that will reveal the truth about the invisible world and the Gold of Voodoo have such a chance.

Visually, the Voodoo Gold slot machine looks great. The playing field is located right in the middle of the forest, around you can see trees and dense, green fog, which creates the feeling of something creepy and mystical. From a technical point of view, the Voodoo Gold slot is no different from its predecessors, as in previous models the main actions will take place on six reels, and combinations will be formed using 4096 methods. But note that with the Avalanche game engine, the number of ways to generate winnings can reach a maximum of 262,144.

Among the symbols you will see drawn crosses, goats, stars and hearts, hats, bones, chicken legs and bottles with potions, as well as a shaman, Indian, skull, and of course the main character – a brave adventurer Kane. The Wild is a voodoo doll that can replace any character except scatter and bombs.

Voodoo Gold uses the Avalanche function, its meaning is that you start playing on six reels, four rows and with 4096 ways to form your winnings. When you get a winning combination, winning symbols explode, allowing new ones to fall into free cells. Then each avalanche adds an additional row, and accordingly with each Avalanche the number of ways to win increases. Here are how many ways to form combinations can be, depending on the number of rows:

All symbols of low, medium and high values ​​can appear on the playing field in four different sizes, ranging from standard 1×1, super 2×2, mega 3×3 to epic 4×4. Large symbols are highlighted in green, and under certain conditions they can go down, destroying all the symbols in their path until they reach the bottom row, after which they participate in creating a win.

Bomb feature – pay attention to single and double bombs appearing on the playing field. If one bomb appears, it will explode and destroy all the symbols around it, with the exception of wilds and large voodoo symbols, to make room for new images. If two bombs appear on the playing field, they will be connected by a beam and all the symbols touched by the line drawn between them will also explode, freeing up space for new images.

Free Drops – starts when there are 3 or more bonus symbols on the reels – 3, 4, 5 or 6 bonus symbols will bring you 6, 9, 12 or 15 free spins, respectively. During them, each winning combination adds an additional row of symbols, which gives you more ways to win – the number of rows can only increase, reaching a maximum of 262,144 ways. Also pay attention to the fact that all non-winning wild symbols during this function become sticky, increasing your winning potential.

To summarize, I want to say that Voodoo Gold is another great slot machine from the developers of ELK Studios, which will be an excellent continuation of a series of games with the participation of researcher Kane.