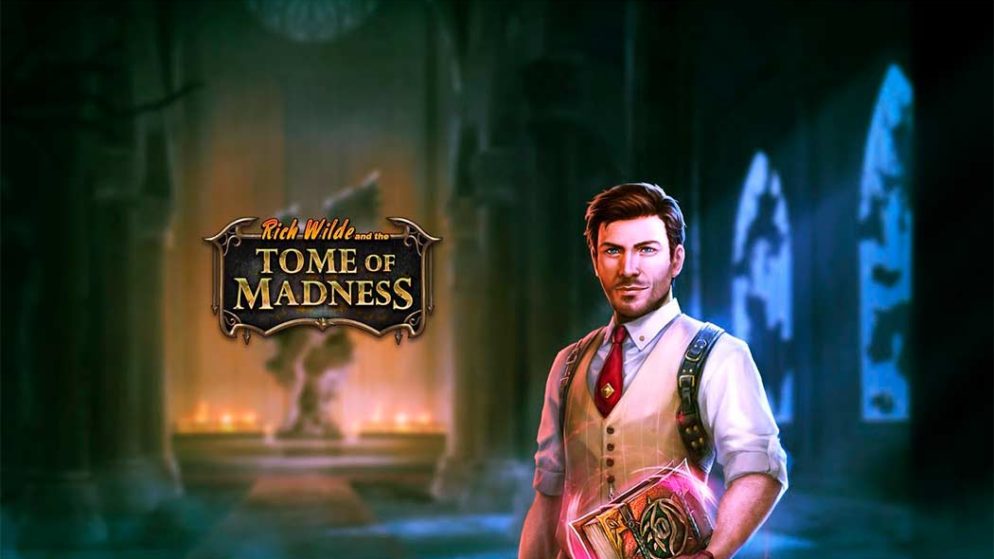 Opening the slot, you will immediately notice that it is different from previous models. The fact is that, unlike its predecessors with five reels and a certain number of winning lines, in Tome of Madness you will find a 5×5 game structure with a cluster system for generating winnings.

The game takes place in a dark room, next to the playing field you will see Mr. Wilde holding a Book. Among the symbols, you will see multi-colored stones, as well as a skull, knife, ring, and pendant, which is the most profitable symbol, and for a cluster of 10 or more such images will bring a win 100 times your bet. Also in the Tome of Madness slot, you will see three variants of wild symbols. The first Special Wild (book), Rich Wilde – plays the role of Wild multiplier x2, and Mega Wild (octopus).

The first feature is called Portal and is familiar to many from other Play’n GO games. Pay attention to the counter located to the left of the playing field. Each time you receive a winning cluster, it adds power to the Portal’s charging, and if you have enough symbols to charge it, you can see various features.

When filling the counter with 7 characters, two special wilds will be added to the playing field.

When the counter is filled with 14 characters, two special wilds are added to the playing field, and if a cluster is created with their help, the Abyss Portal Effect function is launched. In it, you will see that all the characters in the whole row or column where the wild is located will be deleted and used to charge the Portal.

When filling the counter with 42 characters, you activate the Other World Free Round feature, which contains three different portal effects. Please note that for every three additional characters over 42, you will receive plus one portal effect (maximum seven). Effects are activated after each losing spin. Here is what you can expect:

Also during the Other World Free Round, note that 11 or 12 eyes will be visible on the grid. If you form winning clusters at the location of the eye, it will open. If you open all your eyes, the Mega Wild Cthulhu symbol will be released onto the playing field. Mega Wild will move down the grid with each cascade, helping you create more wins.

Summing up, Tome of Madness will be another interesting and exciting slot machine with explorer Rich Wilde in the title role. And the unusual game structure and a huge variety of bonus features will surely appeal to players.