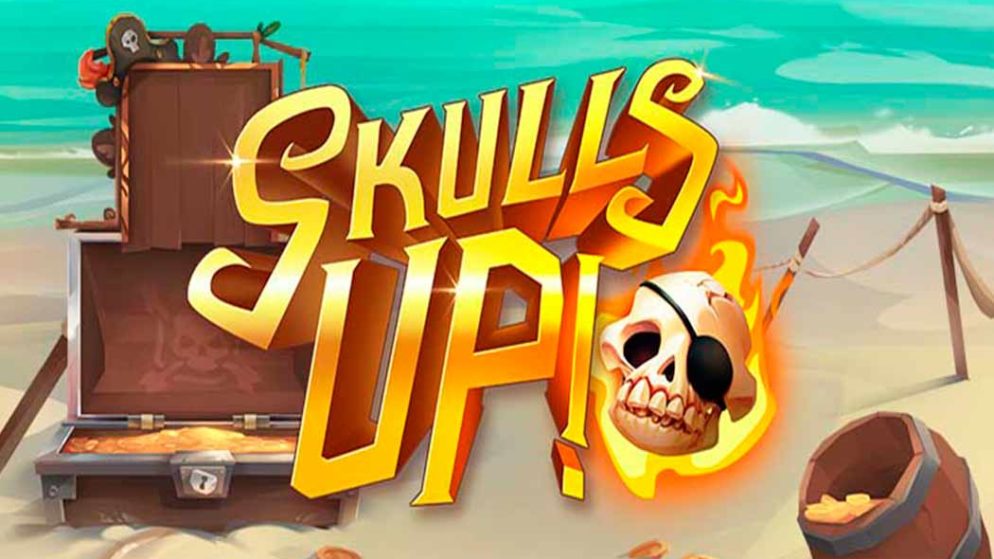 Skulls UP is a pirate-themed slot machine developed by Quickspin. Have you been dreaming about vacation for a long time, but vacation is still not soon? Then the Skulls UP slot machine from Quickspin developers is what you need. After all, playing in this slot you will not only have the opportunity to visit the island of paradise but also earn good prizes. To do this, you need to launch the Skulls UP slot machine on our website and join the company of pirates to go on an exciting adventure on a tropical island for hidden treasures.

Play For Free Skulls UP Slot

The design of the Skulls UP slot machine looks simple, but at the same time interesting and of high quality. As you may have guessed, the main actions will take place on a tropical island, and it was he who became the backdrop for the playing field. Behind the gaming reels, you will see characteristic tropical plants, the ocean and a boat in the sand. A great addition is a rhythmic music playing throughout the game, thanks to which the necessary atmosphere is created.

On the technical side, in the Skulls UP slot you will find five reels, three rows and 243 ways to form your winnings, but thanks to one interesting feature that we will discuss later, the field can increase to six rows and 1944 ways. Winning combinations consist of three identical symbols falling from left to right on adjacent reels. Symbols include card names A, K, Q, J and 10 that appear on wooden coins, as well as a parrot, a monkey, and three pirates.

In addition to standard symbols, the Skulls UP slot has special images, among them: a regular skull – serves to replace standard symbols in the game, a fiery skull activates an interesting feature and a treasure chest – it starts free spins.

Bonus features of the Skulls UP slot

Re-Spin feature – activated when a fiery skull falls on the playing field. Before the reels rotate, any fiery or ordinary skull will move to additional rows above its position. The three middle reels can reach a maximum of 6 rows, and if there is no more space at the top, then the wild symbols remain in place. During repeated spins, if the combination is formed using a fiery skull, the flame goes out and it turns into a standard Wild. Repeated rotations continue until fiery skulls appear on the playing field.

Free Spins feature – activated using scatter symbols (chests). To do this, you need to catch three scatter symbols at once in one rotation, after which you will become a member of 6 free spins. The advantage is that these rotations will occur on the enlarged playing field with closed cells, as in the main game. You can unlock these cells with the same symbol of the fiery skull. And if you are lucky you will not only unlock all the cells but also be able to get six additional free spins.

In conclusion, I want to say that Skulls UP is a fascinating slot machine from the Quickspin developers, playing which you will have a great time, and the slot itself will be a great addition to the portfolio of this developer.