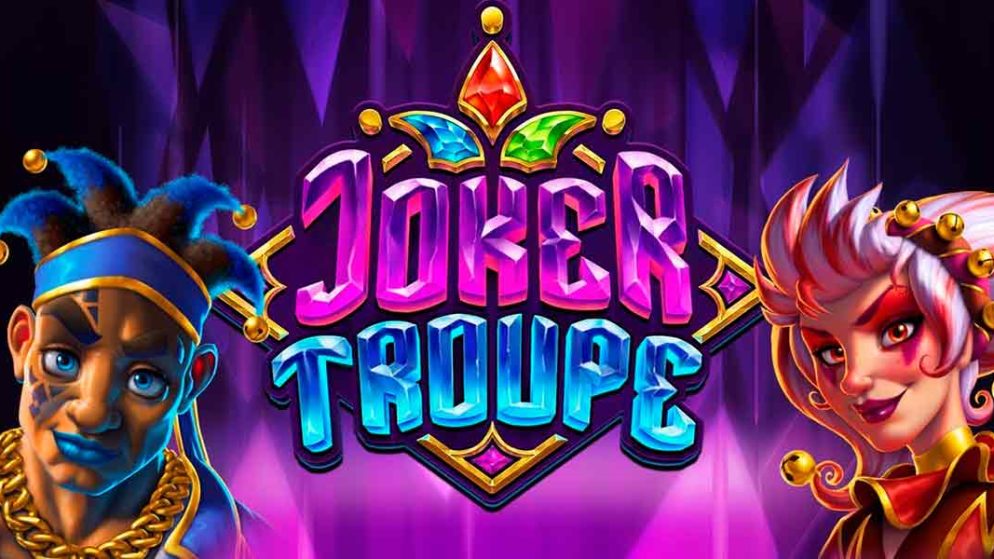 Meet an unusual slot machine with interesting features from the developers of Push Gaming. Joker Troupe is a bright and colorful combination of classic appearance and modern gameplay from the creative team of Push Gaming. At first glance, it may seem that Joker Troupe is an ordinary classic model, but as soon as you start playing, you will immediately realize that this slot is not so simple as it seems. And given the fact that Push Gaming, which is famous for its unusual and colorful games, was engaged in its creation, everything becomes much more interesting. Let’s figure out together what the Joker Troupe slot machine has prepared for us.

The design of the Joker Troupe slot machine looks simple, but at the same time very beautiful and concise. The playing field is located on a glossy purple background with flying geometric shapes on it. As for the technical characteristics, the Joker Troupe slot consists of four reels with three rows, and the number of lines to form your winnings is only ten.

The symbolism of the Joker Troupe slot machine looks quite interesting and unusual, if you go up the paytable you will see: a blue ball with a drop depicted on it, a red ball with a flame, a fruit called carambola, pitaya (dragon fruit), cubes resembling dice with a variety of drawings and an infinity sign in red and yellow.

The infinity sign is the most expensive image in this slot machine, and if you can get two, three or four of these symbols on the winning line, your prize will exceed your bet by 1, 20 or 100 times. But the most important and expected symbols in the Joker Troupe slot are three jokers who created their own troupe (Red, Green, and Blue) since each of them has certain features that you can see in this slot machine.

As you may have guessed, in the Joker Troupe slot, all available functions are associated with the Jokers. Each of them is able to launch its own specific feature, for this, it is necessary that three jokers of the same color fall on the second, third and fourth game reels. Here’s what awaits you:

Blue Joker feature – activated as soon as the right amount of blue jokers appears on the playing field. After which you will see how hats appear on the place of the jokers and remain in their positions until the end of the function, and you get three respins. Now your task is to collect as many hats as possible, which will appear in four versions. Each hat that appears resumes the number of spins to three. Please note that during this feature the playing field will increase by one row, this happens every time when three hats appeared on the reels, and the winning multiplier also increases to x2, x3, x5, x10, x15 and ultimately x25.

After the respins are over, you will see how each hat shows a monetary value, as a result, they all add up and go to your balance, and the playing field returns to the standard 4×3 size. However, if three Red Jokers appear on the playing field during this feature, you will become a member of the Red Joker Free Spins round.

Red Joker Free Spins – this feature starts with a timer and 20 seconds on the clock. The reels spin at an incredible speed, and your goal is to collect as many winning combinations as possible. Any Red Joker symbols that land on the field fill the counter and give another 10 seconds. Each time the speed increases, and more infinity symbols are added to the reels. The round ends when you run out of time.

In conclusion, I want to say that Joker Troupe is just an incredible and interesting slot, playing in which you have a great time and can earn good prizes with the help of crazy bonus features.