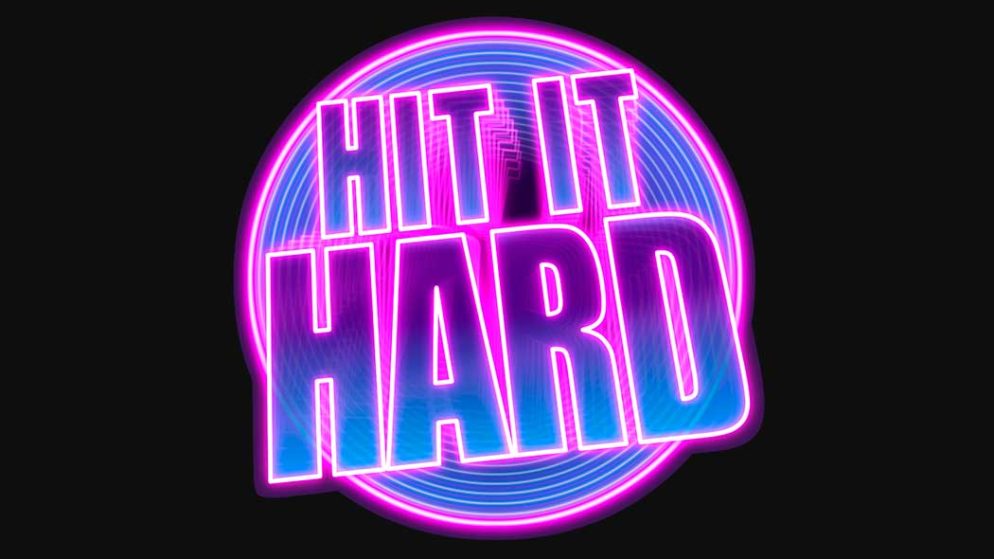 Hit It Hard is a retro-themed slot machine developed by ELK Studios. Despite the fact that in our time there is a huge variety of all kinds of slot machines, some developers continue to pay tribute to the classics. Not an exception is the company ELK Studios which has a whole section with classic slots. In total, the ELK Classic collection already has five slot machines made in the classical style, the last of which was released half a year ago and was called Win Win. And now we are again presented with a slot with a retro theme called Hit It Hard, which became the sixth in the ELK Classic series, and we will discuss it in a review.

As soon as you open the Hit It Hard slot, you will feel like you were back in the 90s, also known as the magical days of neon. Fluorescent lamps are central to this slot, where classic simplicity is combined with versatility. In terms of technical characteristics, Hit It Hard is a classic model with three reels and five lines on which your winnings will be formed, they are awarded for only three identical symbols in a line from left to right.

The payout table is quite short and simple, in ascending order you have cherries, lemons, watermelons, green, blue and red Bar inscriptions, as well as green, blue and red sevens. Also in the slot, there is a wild symbol (corresponding inscription), which can appear on the second and third reels, replacing the missing symbols. And the most important symbol is the pink dice, which acts like a scatter and activates the main features in the Hit It Hard slot.

When playing the Hit It Hard slot, the most common feature that you will encounter is associated with the wild symbol. The fact is that in this slot the wild symbol not only fulfills standard substitute duties but can also activate repeated rotations. How does it work? Pay attention to the third reel, wild symbols with multiplier values ​​attached to them may appear there. So when this happens and the combination is not formed, the third reel is fixed in place, while the first two rotate again, thereby you get one re-rotation.

All the following features and actions will be associated with the pink cube because as soon as it falls on the third reel in the central cell, the most interesting thing will begin. Before the start of the bonus game, the cube turns into a wild symbol with a multiplier of x10, after which all winnings are paid out. Then the actions go to the top of the playing field, where the various features that you can win are located. In total there are 23 positions there and all this represents a kind of board game, where depending on what number has fallen on the die, the number of steps available to you is determined. Here is what you can expect:

To summarize, I want to say that the Hit It Hard slot machine may seem very complicated at first glance, but as soon as you start playing you will understand that this is completely wrong. Therefore, launch the Hit It Hard slot on our website and deal with all its features for free.