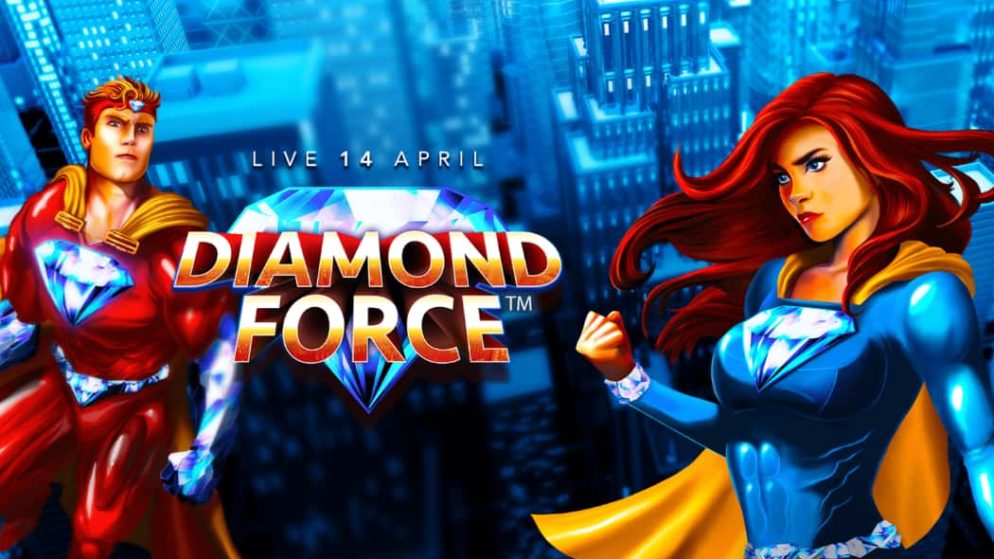 Diamond Force is a slot machine with the theme of superheroes created by Crazy Tooth Studio specifically for Microgaming casinos. Playing in the Diamond Force slot, you have to try to save the Earth in the company of 4 superheroes and if you succeed, in return they will reward you with good prizes.

The playing field of the Diamond Force slot is located in the center of the megalopolis amid huge skyscrapers, consists of five spinning reels, and the number of ways to form your winnings is 1024. Winnings are awarded if three or more symbols are located right to left, left to right, and even in the middle. All symbols in the game can appear in piles, which means that they can fully or partially cover the reels on which they fell.

The range of bets provided in the Diamond Force slot varies from 0.10 to 10 euros, you can play on all devices in manual or automatic mode. The RTP of the slot is 96.53%, the volatility is high, and the maximum payout per spin will exceed your bet by 13,175 times.

In the Diamond Force slot, the main actions revolve around Team-Up mechanics, with which two main features of the slot can be activated.

The first is the standard Team-Up function, which is activated when at least three symbols of superheroes are dropped to their full height. Pay attention to the fact that it does not matter which superheroes appear, the same or completely different, the main thing is that there should be at least three of them. Then you will see a new set of reels, the number of which is determined by how many stacks of superheroes activated the function. For example, 3 stacks of superheroes – 3 reels, four – 4, five stacks – five reels, respectively. Then you get one spin, during which only monetary values ​​and multipliers appear on the reels. When the reels have stopped all the monetary values ​​displayed on the field will go to your balance.

The second is Team-Up Bonus Spins, which is activated when a full-size bonus symbol appears on the fifth reel and 2 or more 3×1 superheroes on other reels. In this round, the same rules apply as in the standard Team-Up round, the exception is that you get three spins, and their number can be increased if additional bonus symbols appear on the playing field (up to 20 in total).

Concluding, I want to say that the Diamond Force is a rather interesting slot machine with good features and good winning potential. Playing in the Diamond Force slot you have a great time and you can get decent prizes.