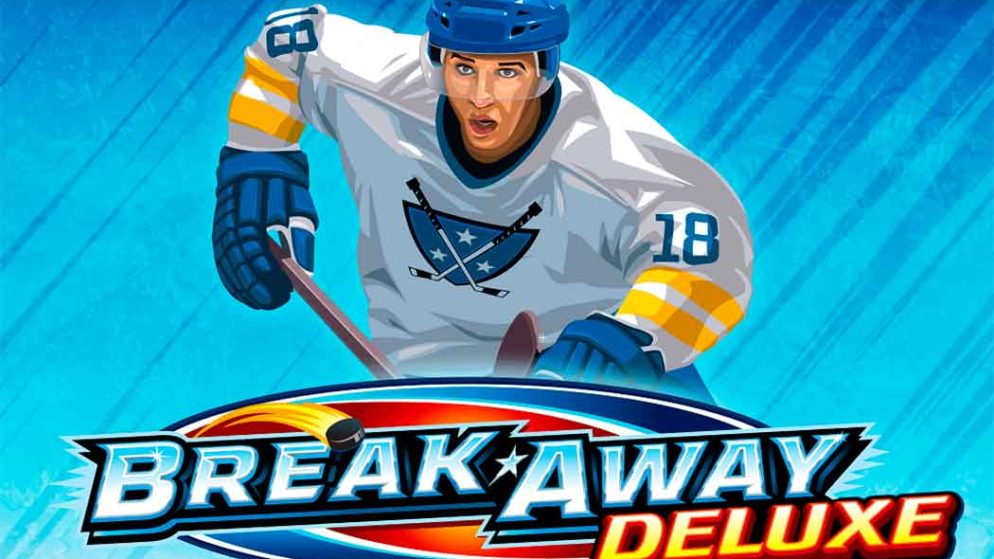 But on the technical side, Break Away Deluxe slot machine differs from its predecessor, the most basic difference is that in the first model the playing field had a more standard structure, namely five reels and 243 ways to generate wins. As for the Break Away Deluxe slot machine, here we are waiting for a 5×5 playing field and from 18 to 88 pay lines, the number of which you can choose yourself.

The design of the Break Away Deluxe slot machine is very minimalistic and has a sports theme. The playing field is located on a blue background resembling ice. After all, ice is an integral part of such a sport as hockey. The logo of the Break Away Deluxe slot flaunts in the upper left corner, a little lower you will see cells with numbers – 18, 38, 68 and 88, this is your possible number of game lines that you choose yourself.

The symbolism of the Break Away Deluxe slot machine is fully consistent with the hockey theme, on the playing field you will see: a resource interface player, skates, a helmet, an ice arena, fighting hockey players, a referee, a goalkeeper and two players from different teams (in white and red uniforms). Among the special characters, you will find: Wild (Break Away Deluxe slot logo) and scatter (puck).

The first thing I want to note is that the Break Away Deluxe slot machine uses the popular Rolling Reels feature, which is present in many other Microgaming slots. Its meaning is that when you form a win, the symbols involved in it are removed from the reels to make room for new ones. This gives you a chance to get multiple wins in one spin.

The next feature is associated with a wild symbol (slot logo). Please note that during the main game, the wild symbol appears only on reels 3, 4 and 5 in the main game and on reels 2, 3, 4 and 5 during the free spins function. This symbol replaces all images in the game, except for the scatter symbol. A nice addition is that this symbol can appear in long stacks, which means you will have many more chances to form a good combination.

To help you get more wins, the game has a randomly activated Smashing Wild feature. Hockey players will randomly appear in the main game and turn reels 2, 3 or 4 into completely wild ones to guarantee you a winning combination. The wild reel will remain in place for the next consecutive wins.

Free Spins feature – activated when three scatter symbols (puck) appear on the playing field. If this happens you will get 12 free spins. During which for each consecutive win you will see how the multiplier increases. At the first win, the multiplier will be x2, with the second x3, with the third x4, with the fourth x5, and with the sixth x8. Also during free spins, you will find a feature called Growing Wilds, its meaning is that after each spin, another symbol will be added to the stack of wild symbols.