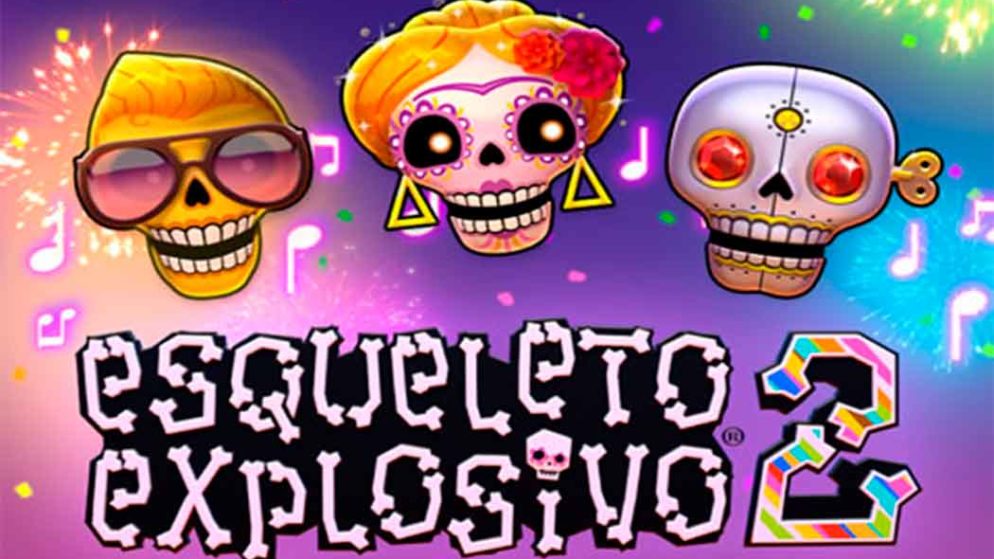 As soon as you open the slot, the first thing you notice is a completely unchanged design. The background for the game, as in the first version, is a street with houses, and the reels, or rather skeletons on which the symbols in the form of skulls land, are located on a table with candles. But the game engine of the Esqueleto Explosivo 2 slot has undergone significant changes. The mechanism of the game in Esqueleto Explosivo 2 remains the same with 5 reels and 3 rows, as well as with the multiplier Mucho, located below.

One of the most significant changes is that the number of ways to generate winnings has been increased from 17 to 99 paylines. This means that winning combinations are formed of 3-5 symbols, touching diagonally or horizontally on adjacent reels from the first one. The symbolism of the Esqueleto Explosivo 2 slot machine has also not undergone any special changes, the same skulls from the first part will help you shape the winnings, the only difference is that another skull is added – with yellow hair and it is the most profitable image.

The golden skull with sunglasses is still the Explosivo Wild symbol, appears only on reels 2, 3, 4 and replaces all the usual payment symbols. A robot skull with red eyes and a key sticking out of the right ear acts as a scatter.

Thunderkick developers decided to keep all the good features of the original, but at the same time make a few game-changing additions. The game mechanics of Dropping Symbols, which we saw in the first part, return again. This is a cascading system of wins that explodes winning symbols removing them from the reels, allowing new ones to fall into their place and form new combinations. For each winning, the multiplier will increase, which starts with x1 and doubles with each successive winnings – x1, x2, x4, x8, x16, with x32 being the maximum during the main game.

The Mucho multiplier also increases whenever wild (golden skull) appears. Wild symbols appear on reels 2, 3 and 4 and replace all images except the scatter. They also explode and destroy 3 to 8 characters in the immediate vicinity.

Fans of the first part will be happy to know that in Esqueleto Explosivo 2 Thunderkick developers decided to add a round of free spins, which was very lacking in the original. In order to activate it, you need to catch 3, 4 or 5 scatter symbols (robot skull) during the main game. As a result, you will get 10, 12 or 14 free spins, respectively. Scatters continue to appear during free spins, and when dropped in at least two pieces, they will bring you additional free spins.

During free spins, interesting features come into play, namely the collection of wild symbols. If you collect 3 wilds, get one additional free rotation. Also, the lowest multiplier (x1) is removed and replaced by x2. This continues until you get a 32x base multiplier and as soon as this happens, the x64 multiplier comes into play for three more wilds collected.