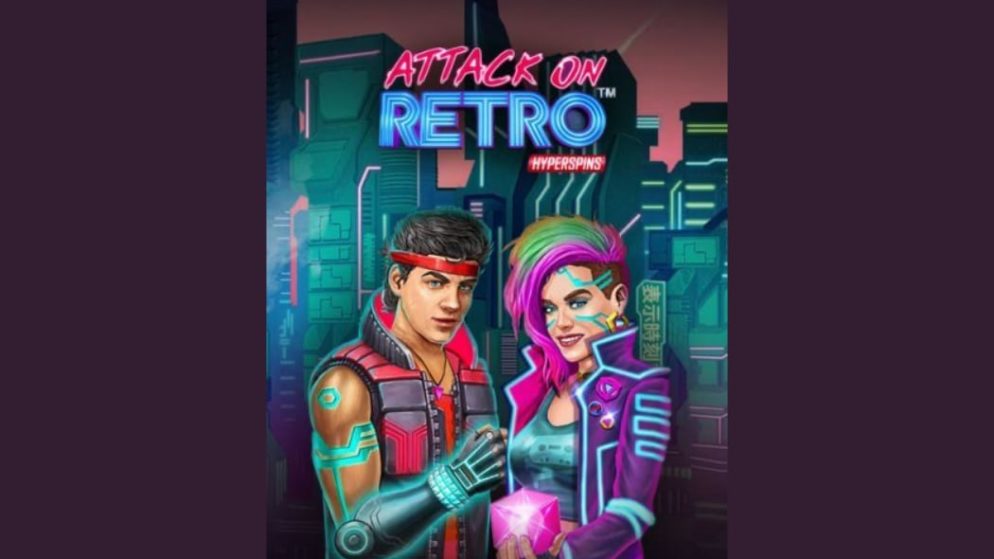 Attack on Retro is a slot developed by partners of Microgaming company – Triple Edge studio. The slot machine Attack On Retro, immerses you in a metropolis filled with bright, neon colors. There you will meet with the two main symbols of the slot – Jesse and Billy, who went out to fight the robots.

The Attack on Retro slot is equipped with five reels, three rows and 10 lines on which your winnings will be formed. To get a win you need to catch at least three identical symbols from left to right starting from the first reel.

The maximum possible payouts for one spin reach x1000, provided that all positions on the five reels are filled with one of the main symbols – Jesse or Billy, they are the most valuable symbols. They also play the role of wild symbols, can replace all images in the slot, with the exception of scatters and each other, appear in sizes of 1×1, 1×2 and 1×3.

The maximum payout provided for in the Attack on Retro slot is x5000. This can happen during free spins with a multiplier of x5, taking into account the complete filling of all cells with one of the wild symbols. The default RTP is 95.58%, using the Hyperspins function increases RTP to 96.08%.

There is a feature called Hyperspins in the Attack of Retro slot. Hyperspins are similar to respins that are available on any basic spin. But instead of re-spinning all the reels, you can spin individual reels. For example, you have 4 top symbols on the payline, but not on the middle reel – activating Hyperspins gives you a chance to catch the missing fifth symbol. For this, you have to pay a certain amount, which varies depending on the profitability of the combination.

The next feature is called Random Wild, it can be activated randomly on any spin, and when this happens, robot symbols will appear on the reels. Lasers randomly shoot them, and if they fall into one of the robots, it turns into a wild symbol. In the main game, you can detect up to 15 wild symbols or up to 3 symbols during respin. During the free spins round on reels 2, 3 and 4, up to 9 wild symbols can be detected.

The last feature is the free spins round, access to which you can get when 3 scatter symbols appear on reels 2, 3 and 4. After starting, you can choose one of three game modes:

In the free spins function, you get 2 fixed wilds on reels 1 and 5, which randomly alternate between Billy and Jesse 1 × 3 in size. An additional drop of scatter symbols in the amount of 2 or 3 pieces will bring you another 5 or 10 free spins, and the Random Wild feature can be activated at any time.

In conclusion, I want to say that Attack on Retro is a very worthy slot machine, playing in which you can benefit from random wild symbols and multipliers.